This year, though, she’s been doing very well.
We get a crushed barley/wheat chop for mixing into the hennys layer crumbles, and it was the piggie’s feed…well, turns out, our Sable does well with a 1/2 cup of it in her beet pulp.

having a bit of a roll in the snow… 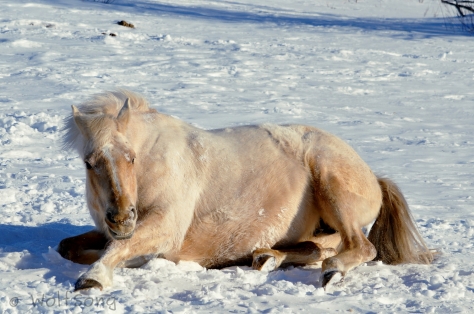 I love this shot so much…feral or friendly Palomino?!?

By now, most of you, if not all, know that Sable is our accident prone Palomino. Also known as my Bubble Wrap Girl.
She can hurt herself with out even moving.
No joke!
I’ve had her lead rope looped on the fence, her standing there sleepy, with no injuries…turned my back to grab something from the grooming kit, turn back and find blood running down her leg.
LOL!
No idea how she cut herself when she didn’t move, but she did it.

So, when she does this…

…I worry like crazy that the Girl is going to hurt herself getting out.

And then, a couple of weeks ago, while Hubby was scraping the poop piles down with the tractor, he hit a particularly well frozen piece that shifted the tractor and the bucket cut the trough.
F.M.L.
Because now, we can’t use that trough for water come spring/summer…I have to buy a new one.
Yay…said not me.

However, it’s still fine for hay, and then, I found this blog post, where they had the brilliant idea of using the trough for chicks.
Um, yes!!
In the mean time, I had to fix the sharp edges of the cut. Because, again ^^^ Bubble Wrap Girl will climb in the trough to eat.

Armed with a hammer, pair of pliers and a couple of files, I set about to make the extra sharp gouging metal safe for the most accident prone horse I have ever met.
At first, I hammered the big pieces back into place, bent them in with the pliers, and then, had to climb into the trough itself to do the filing…after I cleaned out the hay.

Here I am, in a 6 foot, 200 gallon stock tank, trying to file sharp edges off, when Sable comes around the corner of the shelter.
And the whinnying starts.
HAHAHAHAHA!!!
She danced and pranced and whinnied like the world was ending.
It took me a minute to realize she was giving me shit for being in the trough…like I do to her. 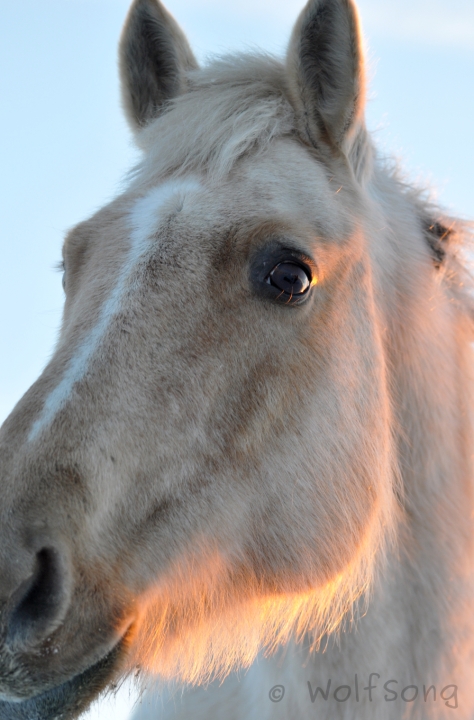 Now, I’m trying to finish up while she’s standing over me, giving me trouble for doing what she’s not allowed to do…

She had her chin on my back…this was all I could see, looking up.

And then…Ms ImaBigMamaSuck tries to climb *into* the trough with me! Surprisingly, I wasn’t having any of that. LOL!

“Mean. You are mean to me Mama.
~Sable

Finally, I was able to get the trough fixed enough that Sable *shouldn’t* hurt herself on it…no guarantees.
It’s been several weeks though.
So far, so good.
😉

Edited to add:
Forgot to show you the fixed hole…

As outdoor garden time ends, the indoor plants are growing wild.
Butchering season also means a lot of canning.
Karl and Lenny came in for a bath over the weekend.