Hubby was given a whole lot of apples.
More than 50lbs worth.
Nice apples too.
So, I sorted into “wine,” “eating” and “livestock” piles.
And then, we sent the Merry Mares bobbing for apples…

Astrid thought this was pretty awesome…until she snuffled in a nose full of water.
Then, not so fun! 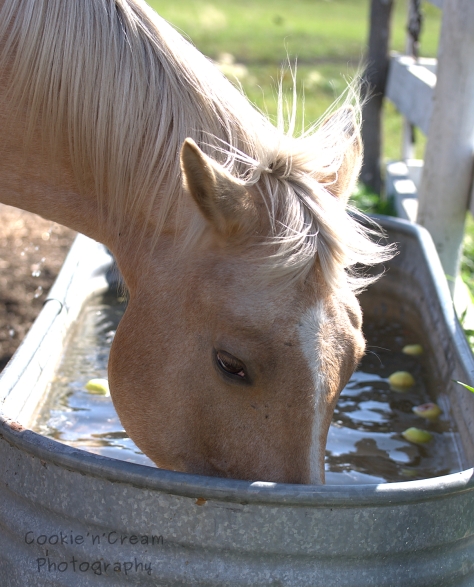 Pretty Sable…I love her natural black eyeliner…looks so good on her. 🙂 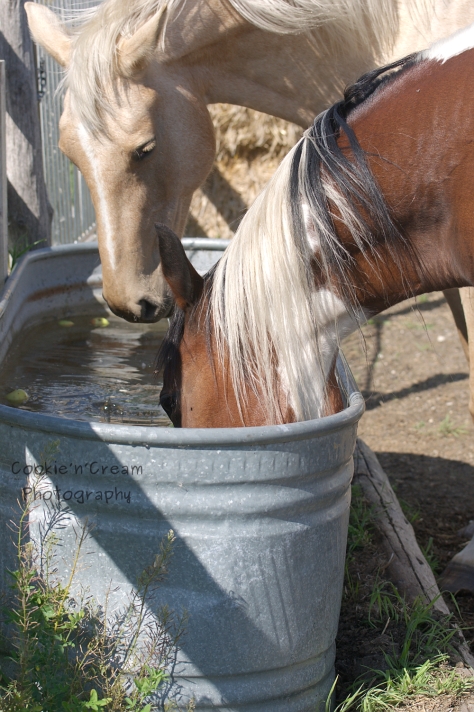 Sable looks disgusted at how deep Ruby was willing to go for an apple. lol 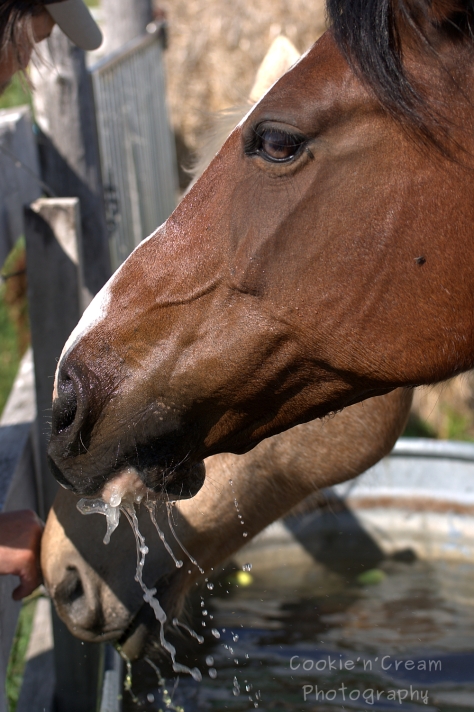 Got it!!
Nom nom nom

She’s rather dedicated when it comes to food.
😉

We still have half a 5 gallon pail for the horses, a crisper full for humans, and I just pulled the bag of apple mush out of the fermenting wine. That made little piggies very, very happy!

Next wine prospect…
Either concord grape or banana.
Or, maybe I’ll mix the 2.
Because that might just be interesting.
😉

Playing along with The Daily Post prompt of Pink… 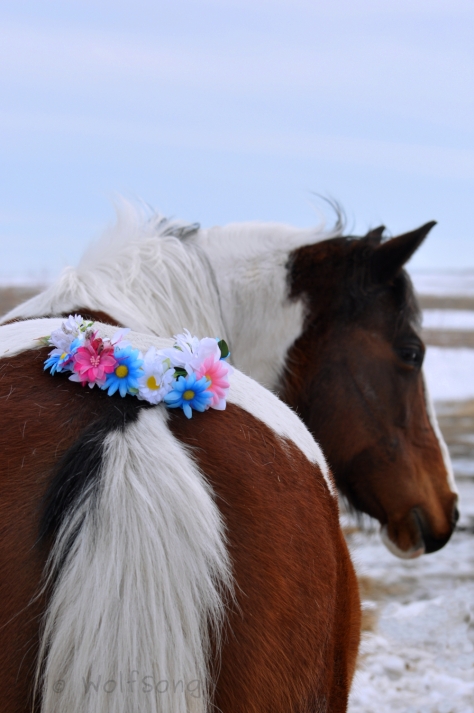 Pink flowers on a lovely rump…

Pink mints for a Certain Girl… 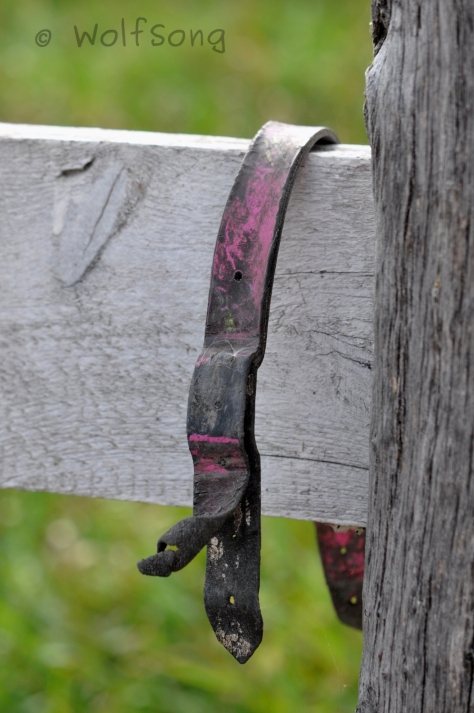 What was once a pink halter crown… 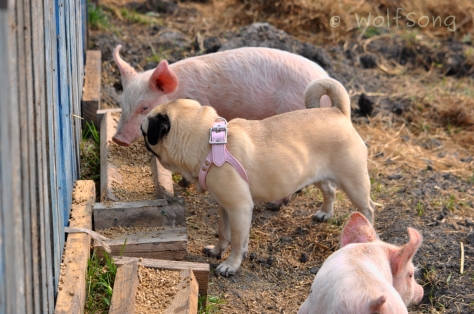 Sable and her pink hat…

I call it a Pasture Dragon…I don’t actually know what it is.

When Hubby found it, I said “Pictures!” and he proceeded to put it on Sable’s bum.

Nestled perfectly on her bum…

Sable, however, was unimpressed: 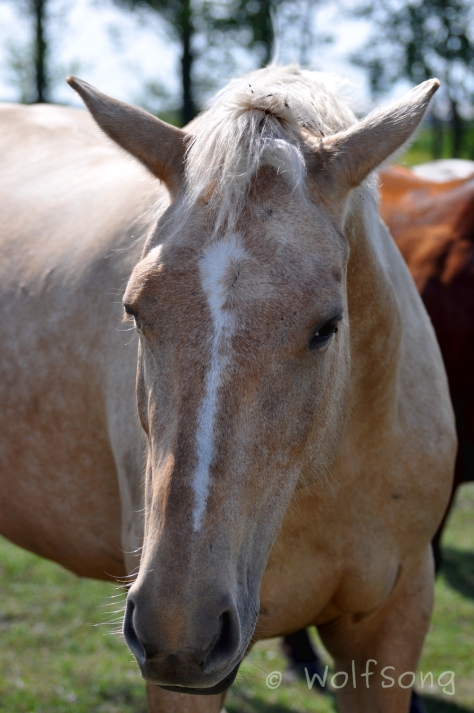 I thought it was cute.
LOL!!
The Pasture Dragon might have to make a few appearances in other places too… 😉

Alright, this should be the last post with Santa hats and reindeer antlers. 🙂 Should be. I haven’t done a full edit of the pictures, just cherry picked the best ones, so there might one of two more shots to share after this.

Though she doesn’t look Grumpy in this shot…
Poor Astrid was having a tough time with the bells on the halter, which is why she was dubbed “confused”.

We had a Santa hat to go with the bells, but only Sable and Astrid wore it…then we had to let Astrid go, after a back rub. She was just too freaked out by her face jingling. Which tells me that I have to make something with bells on it for her to wear, to get her used to it.

She made a heck of a model here…

Every time she moved, the bells jingled and she was sure something was sneaking up on her. This ^^^ is a great shot of her though.

We had to use nummies to get Sable to focus on the  camera…yeah, she was a little too focused here! Finally, she settled down and we got a good shot of her…

“Nom, nom…thanks for the nummy!”

Ruby was amazing. Kid and Hubby figured it was going to be a rodeo with The Paints. Meh. I’ve been working on haltering them without the corral panels. I walk up, let them check out their halter and slip it on. Yes, they still have their break aways on, but, that’s okay, it’s still progress…5 minutes from out the back door to halter on Paint faces. Amazing!! Compared to Cookie’s first time being haltered here. 4 panels, 3 people, 2 hours.

Look at that face, the body language!! All says, “Alright, what would you like me to do?” ❤

Anyways…like I said, I had faith in our Painted Ladies. 🙂

Had to get Hubby in there with his reindeer. Gotta say, Santa looks cold!

She did great, for someone who’s typically scared of everything. 😉 My favorite shot though, is the next one. Of the 20 or so shots I took, the next one is the only shot like it, everything else she was fairly relaxed and happy in…

Hahahaha!! I love that shot! Clearly “Santa” said something to cheese her off! 😛

Love this early morning shot of our chunky munky, Ruby @thepaintedunicorn2018 There's no denying the beauty of this life...no matter how hard it can be sometimes. 💙 . #Ruby #MajesticAF #SlightlyAlcoholicFatGirl #thepaintedunicorn2018 #PaintedUnicorn #unicornindisguise #unicornsofinstagram #hoarfrost #earlymorningphotography #CookienCreamPhotography
I've been doing the #Capture52 photo challenge on my photography page @cookiencreamphotography This week's theme is #green... I chose the green bean test plants in my kitchen window...gotta say, I quite like this image! 💚💚💚 . #greenbeans #witchesofinstagram #pentagram #kitchenwindow #testingbeanvarieties #welikegreenbeans #nomnomnom #CookienCreamPhotography
Started a batch of salt cured egg yolks yesterday...how I did it is on the blog. Link in bio! . This is my first time making them...anyone else make them? Love 'em? Hate 'em? What do you think? . . #farmfresh #farmtotable #fresheggs #fresheggsfromhappyhens #saltcuredeggyolks #theylookyummy #cantwaittotryem #nomnomnom #midnightcalicofarm