For that I am thankful.
I know people like birds as pets, and I’m happy for those who have them and love them.
Good for you. 🙂

I, however, hate the stink of birds in my house.
So I am glad to have the chicks moved outside to the brooder.
We have 45 in total this round.
We didn’t have as good of a hatch in the big incubator.
Only a 50% hatching rate.
But, I was able to identify a few things that I can work on for the next round, and hopefully that will go up.
A lot.

Next lot starts in a week or so…
I’ve got a couple dozen hatching eggs on order from the same Farm LemonChicken came from (I feel like I may have told y’all this already lol).
I’ll set those with a bunch of ours, to hatch out for our meat chick pick up day.
Assuming that still happens.
Money is funny right now, since Hubby’s work shut down for 2 weeks.
It is what it is though…we have no control over anything right now, except for our ability to grow food.
So that’s what I’m focusing on.

*Someone* is a real go getter.
Chirping started last night.
On day 19.
Someone is ready to take on the world!
I say “go you, little chick!! we’re gonna need more like you!”

I ordered my garden seeds today.
Almost everything I didn’t have for the garden already.
Still want to get onion sets and a couple trays of johnny jump ups.
But those come later.
At least for today I have filled the need for the seeds we were missing.

I’ve been out taking pictures too.
Like this lovely shot of Astrid… 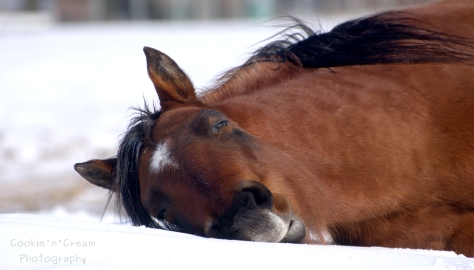 While she looks like she’s drunk, she’s just having a darn fine nap.
I, however, will be drunk when I nap on the snow drifts.
😂😂😂

So far we’re holding onto our sense of humour.
Not gonna lie though, I’m angry.
I am angry as fuck right now.
I’m angry at how fast and willing society has dropped to it’s knees and accepted restrictions of basic freedoms.
My province is under a state of emergency, which means no gatherings larger than 50 people.
Only so many people allowed into grocery stores.
Only so much of any product is allowed to be purchased.
We’ve fallen far and fast and absolutely bloody willingly.

*Especially* when there are no answers on what comes after the 30 day state of emergency comes to an end.
Chief Health Officer of Canada say this could go on for 18 months…or more.
So yeah.
I’ve joked about burning it all to the ground and starting again, but that was to introduce *LESS* govt, not more.

For now my Hubby’s work is still operating.
But I don’t know for how long.
What I do know is this…somewhere down the line, people are going to get fed up with self isolating and social distancing.
Somewhere along the line, people are going to have to go back to work.
Mortgages will need to be paid.
Utility bills too.
Food will need to be purchased.

And then it’ll start again.

So, all I can say is this…
Take as much control of your food supply as you possibly can.
Now.
Grow your gardens, source your meats, consider (even in the city) raising your own food animals.
Maybe you can’t have goats, or chickens, but you *can* have rabbits and pigeons.
Squab is, after all, considered a delicacy to many.
Grow your own.
And learn to preserve it for winter.

My gut says we’re going to have to have as much control over our food as we possibly can in the coming months.
Hopefully, my gut is proven wrong.

It’s day 19.
The turners came out of the incubators today.
We oughta hear cheep, cheep, cheeping in the next couple of days.

Hatching can start as early as day 20 and go as late as day 23.
Soon though, we’ll see what our hatch rate for this round is.

This is exciting to me.
I’m not sure this will ever get old.
🙂

These are from last year.

There will be new pictures once we see what/how many hatch.

My pepper seeds are popping up through the soil.
They’re up enough that it was time to turn the lights on.

Tomorrow night we take the turners out of the incubators and they go on lock down until hatching…which should start Sunday/Monday and finish by Wednesday.
Then we’re on a break until the 5th of April.
I’ll fire up the incubators again then, so that hatching will coincide with the delivery date of our meat chicks and turkey poults.
Yup, I’m gonna take the plunge and try raising turkeys this year.
Wish me luck!
lol

I’ve been reading Gabe Brown’s book “From Dirt to Soil” and had a bit of an epiphany when he talked about their personal gardens.. 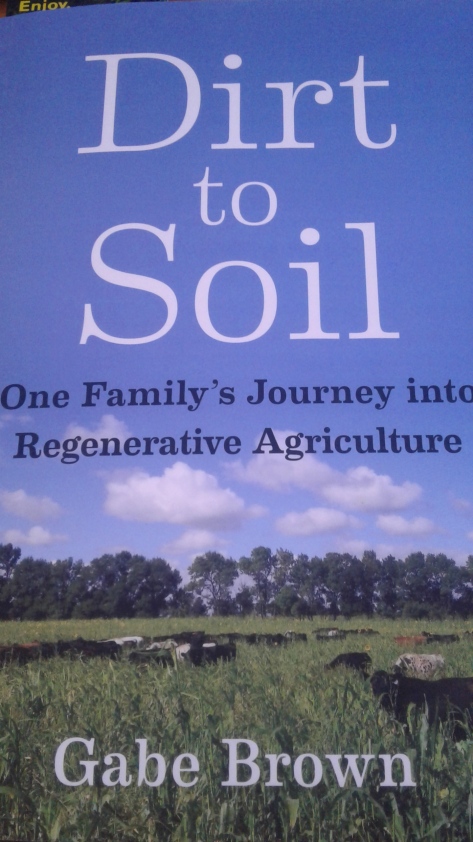 He talks about planting flowers in the food gardens to attract pollinators.
And the light bulb went on for me!
See, I’m a “grow all the foods!!” kinda gal, so I never really paid much attention to flowers.
But it makes sense that flowers to attract pollinators will help increase food crop yields, right?
D’Oh!
And then I started thinking about edible flowers.
Or flowers I can use in soaps.
Or feed to the poultry.
And then it made some sense to plant flowers along side my veggies.

So that’s what I’m planning this year.
I have an abundance of marigold seeds, so I’ll start a bunch of them in a few weeks.
And there will be, of course, sunflowers.
We’ll see what else I can find to add.
Hopefully some violas (johnny-jump-ups) because they re-seed and spread like crazy. And they’re pretty. And tasty too.
I may also let a mint run rampant in the garden too…

I think I’ll also be harvesting our dandelions a little harder this year.
Young greens for salads, older greens for cooking/canning.
Flowers for wine/mead.
Not the roots.
I tried dandelion root coffee once and did not like it.
Besides, digging roots takes away the renewable plant for other uses.
It’s an abundant resource we have, and I’m going to use it.

But for now, it’s just dreams and plans.
We’re still under a bunch of snow and will be for another month at least.

Dozing in the sunshine…

Sharing with Brian’s Home for Thankful Thursday…because I know how blessed I am to have, not only these resources to use, but the ability to use them.

That said…I have, in the past, picked up a little extra money freelance writing for online homesteading magazines…most notably homestead.org.
And, having submitted a few ideas back in January, I got the go ahead to write 3 articles for them.
Yay!

So I’m busy writing those…and once they’re live, I’ll share the links so y’all can read them.
🙂
Hopefully I can keep up the writing streak here, but, things might get light here and there.
Paying work has to come first.
Mama gots to makes the moneys, ya know?
😂😂😂

But I’ll do my best to keep things rolling here…after all, in just about 2 weeks, there’s gonna be chicks hatching, and I’ve got 3 new ducks coming today…including a drake for my Muscovy hens.
I don’t want y’all to miss chicks or ducks. Or new equine pics. Or the latest Capture52 shots.
Just bear with me if I’m slow, ‘kay?

Sharing with Brian’s Home for Thankful Thursday…
Because I”m thankful to be able to share my Farm life with everyone and I’m thankful to have a few paying jobs coming.
🙂

It is a fact of our Farm life that the only animals here without a job are the horses.
Well, I guess considering how often they have to participate in photo shoots, that’s not quite true.
But they get to eat money more than any other animal here.
😉

Saturday, we thinned out the flock of roosters.
We had in our coop, with roughly 40 hens, 10 roosters.
That is way too many. 3-4 roos to that many hens is much better for everyone.
That way the boys aren’t fighting, and the girls aren’t being over used.
Bare patches on some of the girls is not a good thing.
So, we sent some boys to rehab…aka freezer camp.

The 2 I had held back from last years hatches were 2 of the 6 who got the chop.

This guy is named “Replacement”.
He thinks he owns the place.
lol

Replacement, while handsome AF, had turned into a colossal asshole.
I have no room in my coop for a rooster who attacks humans.
And, he went for my face a couple of times while I was collecting eggs.
So, off with his head.
I won’t even offer up a rooster for free who attacks humans.
That’s some straight bullshit.
Aggressive means soup.

This guy, who eventually earned the name “Fred” went too.
See, back on New Year’s Eve, when we picked up those extra chickens, 3 of the 11 were roosters.
Big roosters.
Like nearly 14lb roosters.
Big boys.
(Those 3 stayed, btw, to breed some size into our flock. Because roosters are food for humans and felines alike here)

Well, Fred thought he was the cock of the walk and tried picking a fight.
Fred got his ass handed to him by one of the big boys.
Ahem…the big guys are named Larry, Darryl and Darryl, fyi. 😉

And Fred was never the same.
Fred was a broken, unhappy rooster after that.
So Fred has become ground Fred and Fred soup.

Now we have more meat in the freezer for us, and there’s a whole lot more happiness inside the chicken coop.
🙂

Today happened to be egg washing day on the Farm. 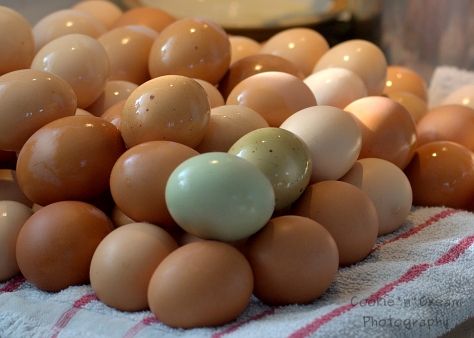 Happens a couple times a week.

Hens lay ’em, I collect ’em, and Hubby delivers them to our customers.

Sharing with Word of the Day Challenge for Country…because having our own egg layers is one of the many joys we have living in the country.
🙂