Brrr, what a chilly morning!
May 30th and we had frost last night.
So glad I hadn’t gotten the tomatoes in the garden yet!
Next week though…that’s gonna be the big push to get them in.

There was a little bit of worry with a couple cold night whether the turkeys and meaties would be okay.
Their house has no heat, no light, no way to add heat/light.
So we gave them fresh straw to bed down in, kept the cross breeze door closed and hoped for the best.
This morning I was met with turkey songs calling for food.
And everyone was juuuuuuust fine!
I kinda figured they would be.
Everyone is feathered out, and they’ve been off heat for a few weeks now.
But I worry.
The very last thing I want is to lose a bird because of my foul ups.
All was good though, so much singing this morning, and so much happy with the filling of the food pans.
🙂

I finally managed to get out and take some pictures this morning.
30 days into May and I finally had the energy to use my camera.
lol
What can I say…it’s been busy, I’ve been exhausted.
That’s just life.

On my way into the pasture, I found this:

Oh look, someone(s) been hiding eggs.
This is my shocked face…but not really.

I had my hands full of the camera, so I’ll go out later and collect them.
Typically I float test to see how fresh they are.
If they’re iffy I hard boil them for the birds.
If they’re scary old, I just break ’em into a pan of grain and feed the birds.
If they test ok, we eat them.
Waste not, want not.

Today it’s sunny.
Our local dump has reopened after being closed due to Schrödinger’s Virus. 🙄
So this weekend is clean up of the farm yard, prep the garden, and straighten up the basement after our weekend of fun with the hot water tank last week.
Plus I have to set up with my Bro a day where he can come help Hubby replace lights down there.
When we moved in there was florescent lights there…now the ballasts are shot and they have to be replaced.
We have from our city house a set of light fixtures we were going to use there…we’ll use them here, with super bright LED bulbs, instead.

And somewhere along the way, I need to get out and pick more dandelions for wine.
I’m getting there.
Slowly, but surely.
🙂

Sharing with Word of the Day Challenge for Sunny.

Beans are in.
Over 500 seeds this year…what can I say? We like green beans. 😉
Straw bales are planted.
I put my peppers in one, with zucchini seeds.
The rest are pumpkin, melons, squashes, sunflowers and cucumbers.
Tomatoes start going in today.
Fingers crossed for a huge bounty. 🙂

Pig babies are growing very well!
I sure like these guys…we only had to lock them up at night for a few days, then left them loose in their yard.
They happily put themselves to bed when they’re tired, and haven’t even once tried to push the fencing.
YAY!!
At 9 weeks now, they’ve grow a good 10 or more pounds since we got them, and are now starting to enjoy the morning slop bucket.
Y’know, the left over bits of coffee and table scraps that get put together for the morning meal.
And, then there’s the things I’ve saved over the winter for them…cream that’s gone bad, pastries that didn’t get eaten, left overs that were right on the edge of going blech but weren’t good for the poultry (we don’t feed human food to the poultry in the winter *unless* they are outside…on those too cold days, they only get the layer feed because it makes less mess in the coop.), small amounts of ice cream that were left too long in the freezer…
I am hopeful for explosive growth on these guys! 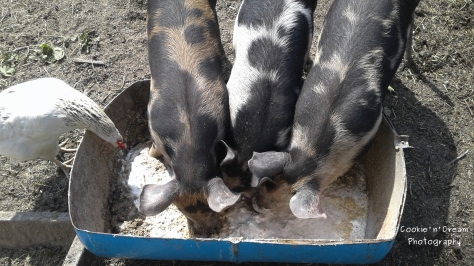 Hubby made a couple of feeders from an old pressure tank…just cut it in half, plop it down and add food.
Works very well!!
And it was free. We love free stuff!
Check out BokBok helping herself to the pig food…I love that these pigs are so laid back that they’re fine with sharing food with the chickens.
😂😂😂

Meat chicks have been evicted from the brooder.
They’re now outside in the meat chicken house (with the few eggies I ordered) with more room and time outdoors.
They’re growing like crazy too.
5 weeks old today and I think we’re on track for Freezer Camp by mid July.
I’m easing them off the grower feed onto soaked/fermented grains.
We found that with the fermented grains they grew a bit slower but we didn’t have problems with them dropping dead of heart attacks…that’s always a possibility with CornishX chickens.
But we get them outside asap, make them have to move around for food and make sure they’re acting like chickens.
Not eating and pooping lumps.
It cuts down on early death by a lot.

My incubator is 11 days into it’s first running.
I candled the eggs on the 2nd.
Took out 3 that were obviously unfertilized (holy did the pig babies love those eggs in their grains!!) leaving me 21 still cooking.
Some were super obvious that there was chick development going on, others like the dark green shelled eggs were harder to tell…but the air pocket looked right, so I left them in.
I’ll candle them again on the weekend, just to see how things are going.
Then, by the 14th/15th, we should be seeing chicks hatching.
Fingers crossed.

Next project on the go…

We have sooooo many dandelions.
I refuse to spray them.
This year I’m making mead. And wine.
So this past weekend, I picked a pail of flowers, and then spent a couple hours taking all the petals off the green parts.
I have to do one more pail to have enough for a gallon batch of mead. That’s all I can do right now because I only have enough honey to do a gallon…

And then I pick as many dandies as I can to make as big of a batch of wine as I can.
The mead will be named after Odhinn.
The wine will be my Palomino Princess white.
I sure hope they both turn out tasty.
🙂

And finally, even though I haven’t had a chance to use my camera (other than a quick couple of shots of the pigs when they came home) for a few weeks, I have a pretty of Ruby to share, because there needs to be at least 1 horse picture in this post.

She is such a funny girl…what a way to sleep!

There is never a day where I don't think about you...
9 years

Getting another batch of honey fermented elderberries going.
Lemon Chicken is finally starting to look like herself after her hard molt...now if she'd get to laying eggs again, that'd be great.
Cooking up a huge bone-in beef roast on this c-c-cold day! 🥶