Last Sunday morning, we got a bit of a surprise…

At random times during the day (and sometimes at night) I like to peek out the back door at the Merry Mares to see what they are doing.
This is how I capture those sleepy, laying down, cute and cuddly pony moments so often.
Because I *know* how lucky I am to work from home and have access to their equine cuteness 24/7.
😂😂😂

So Sunday morning, before we’d done chores, I was thinking about going outside with the camera, but didn’t want to if the nags were just standing around eating…because boring!!
At least napping in the sunshine can be turned into *something* more…
So I open up the back door, stick my head out and see Sable.
Well, her head pops up and she looks at me.
I look at her, and I realize…

There’s no fence between her and I!

I turn to The Other Two and say
“Uh, guys? Sable’s out of the pasture…”

Which leads to a flurry of jackets, boots, and halters and out the door we go.
The Kid walks up to Sable, who hadn’t gone more than 10 feet from the gate, and slips her halter on her.
Sable looked relieved that her Kid had come to save her.
Hubby opens the gate up, and Kid goes to walk Sable right back into the pasture…the only trouble our CinderBella gave her was when she realized I was coming. Then she’s like “But wait!! I wanna see Mom!”…but Kid said “Nope. Mom will come to you, once you’re back in your room.”
Brat.

This is the gate she got out through…

What we think happened was the gate was left unlatched the night before.
It happens sometimes.
Somewhere through the night/morning, she pushed the gate passed the post and got out.
Probably while chasing hay…because they love to toss it around on the ground and search out the smaller, leafy bits.
Knowing her, she got halfway through and discovered backing up hurt (because the gate opens into the pasture, so backing up would wedge it on her body) and so she went forward.
And she wouldn’t know that once out, all she had to do was push back through to get back into the pasture, so she went a few feet away and nibbled dried out thistles…because thistles are nummy, dontcha know!
😂😂😂
Either way, there was a ton of hay in/around the feeders, plus the wheelbarrow load for the next feeding was right there and she wasn’t interested in it…so we know it was just an adventure she was on.

Thankfully, Ruby and Astrid hadn’t left the pasture.
Ruby was around the other side of the buildings, sunning herself.
Astrid was behind the garage doing the same.
But I had an extra halter in my hand, just in case.
lol

What we did learn with this though, was that Sable has no problems coming out of the pasture.
Which is a good thing.
I’ve been wanting Hubby to build us a hitching post in the yard for ages and ages…somewhere we can tie a horse up for grooming, tacking up, trimming…where the others can’t get in the way.
I kinda gave up on the idea the last time I tried to take Sable out to eat down the lawn and she had a panic attack…but we figured out that the problem with my doing that was that it was *just* me doing it.
Her Kid was at school at the time, so she panicked.
Such tiny brains in such big bodies.
😉 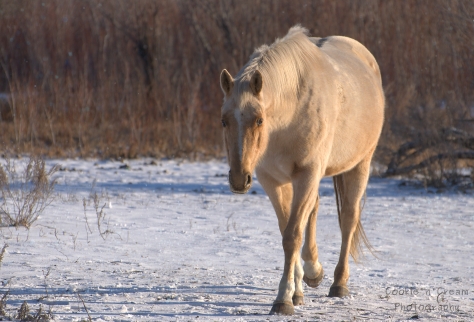 One thought on “Oh Sable!!”

As outdoor garden time ends, the indoor plants are growing wild.
Butchering season also means a lot of canning.
Karl and Lenny came in for a bath over the weekend.