First up, as always, Sable.
Because if Sable ain’t first, ain’t no one getting done.
Trust me. 1500lbs of Palomino tantrums makes sure of that!!
😂😂😂

First you have to check the toolbox.
You never know there might be treats in there…
(there never are, because nosy brats would gobble them up before having to stand like well-trained horses who know how to get their feet trimmed without being gigantic arsewads) 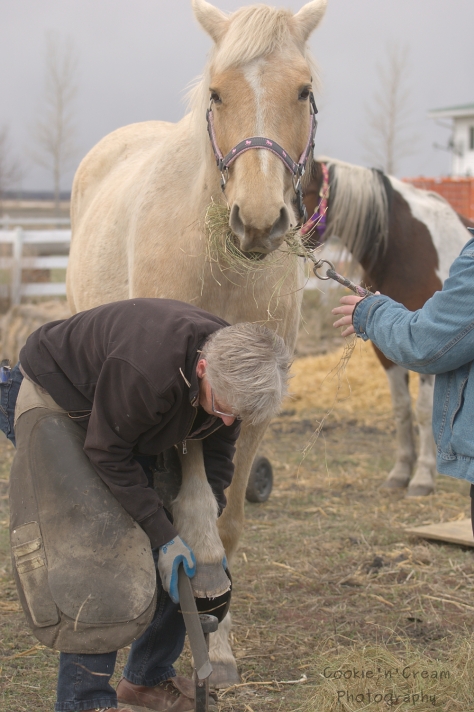 Having hay snax while Michele does the hard work…

Bit of a crack there, but it rasped out pretty well.
Sadly, Sable went far too long between trims. 😦
After she was sick last year, it took a long time before she was able to balance enough to do more than a quick pick out of her hooves.
As soon as we were able to get her back on track lifting her feet, we called in Michele.
I knew she would have the patience to help our Palomino Princess get through her first full trim since being sick with confidence.
❤

Sable sure does love to watch her feet being done.

Somehow, I missed getting shots of Astrid having her feet done.
Not sure how that happened, but it did…

Oh and then there was Ruby.
Geez Lou-eez.
That horse, she’s something.
And this is why I never balk when Michele tells me what I owe her afterwards…

“Oh, I’ll stand here…
I might even doze off…
But I ain’t lifting my damn feet for no one…”
~ Ruby

She ain’t sick, she’s not injured in any way, she’s just…
Ruby.
Her way, or not at all.
*sigh*
But, Michele did get one front hoof up and picked out before the painted asshole decided she was leaving, by going straight backwards…as fast as she possibly could.
Which, lucky me, gave my already fucked up shoulder something to think about. Nothing good, but it was something to think about.
But, when you see the horse is going, and may catch up the person holding her foot in the lead as she goes, you don’t hesitate, you do what needs to be done to make sure the human is safe.
Human safety first.
Always.

So, I snapped the rope up, which made the donkey go backwards a little quicker…but, when she hit the end of the lead she stopped.
Normally, she pulls the rope out of my hand and makes a break for it. This time, she stopped and waited.
And came back at my request.
So…
Humans were safe, and horse, while being a shit, wasn’t as much of a shit as she normally is. 😉 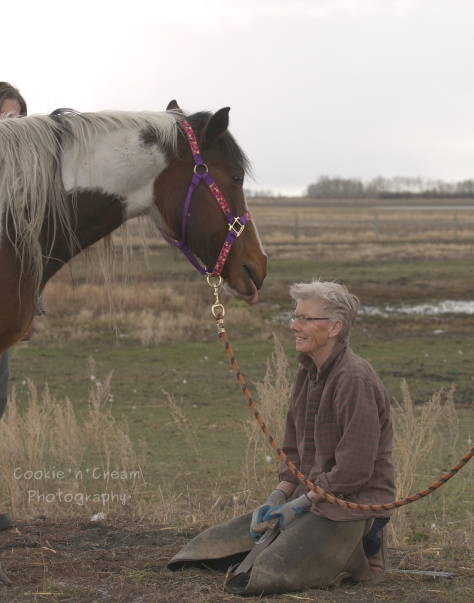 After giving Michele a good sniffing, Ruby took a moment to process her thoughts…

But she still made Michele pull out her yoga moves to get her done.

Sharing with Thankful Thursday at Brian’s Home…because words can’t express how thankful I am for Michele.
Her patience, her caring, her skills with my donkeys is appreciated so much. Having someone work with your equines who understands that everyone has their own personality and own needs is absolutely invaluable.