It wasn’t a huge storm, but just enough to cover the Farm in white and make having to pull the tractor out to clear it away necessary.
Hubby will do that in the morning, while I can up some kidney beans…I’m 33 jars away from putting up 300 for 2018.
Looking forward to what I can do in 2019 when I have a full year to work with. 🙂

While things are quiet, I’m working on my design for this year’s Christmas picture with the Merry Mares.
I didn’t do one last year (no surprise there) but I have an idea in mind for this year (and next) so I hope to get ‘er done tomorrow.
It’s supposed to be chilly, but the sun will be out and there’s not supposed to be any wind.
So nags must make with the pretties. 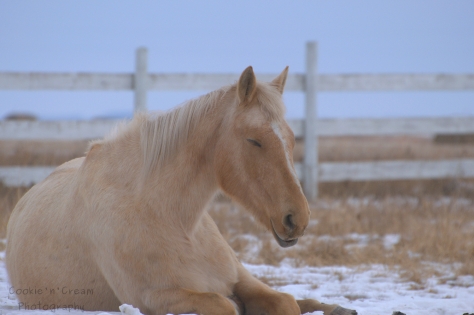 Our CinderBella is doing pretty darn good.
Had a few days where she needed previcox to ease the aches and pains of the arthritis, but things settled down for her as the weather did.
I was worried about how her jaw would handle the hay…but as long as she has enough to chew all night she does great.
It’s when they run out that her jaw stiffens up and she doesn’t want to eat. Of course, the best way to loosen things up *is* to eat, but horses don’t understand that. All she knows is it hurts.

So, we’ve gotten a big round bale of oat straw from friends, and that’s going out in the pasture for everyone to chew on as they please.
It’s taken us a bit to figure out exactly how to put it out for the nags…
I can’t put a round out in a feeder, because Sable.
I can’t just put the round out and let them eat, because it’s net wrapped and because Sable.
I don’t want to roll it out and have them using it as a toilet, because while there’s not a ton of feed value to it, there is roughage and chew/entertainment value, which makes a huge difference a. for arthritic jaws, and b. when it’s really effing cold (because horses keep warm by eating).

Finally, we hit upon 2 med. squares as the base, and the round placed flat on top. Cut the net wrap and let ’em chew.
That way they don’t soil the whole amount and they can pull off what they want to eat.
Fingers crossed this works well for our Sable.
The other two are so chunky…lol!
And, considering we’re headed into the coldest part of winter, fat ponies is no bad thing. 😉
We can whip ’em back into shape come spring.

3 thoughts on “First Snowstorm on the Farm”

If I had known then...that this would be the last time I did Christmas photos here...
Puppy!!

Doe.
Homemade crouton day.
Looks like we're due for another round of equine applesauce.