Y’see, she’s been needing to get her teeth floated (link here to what that means, in case someone doesn’t know) and we made the appointment for yesterday. Hubby had the day off, so it would be an “all hands on deck” kinda day.

I love Sable.
I can do just about anything to her, or with her.
She’s pretty awful about people sticking hands in her mouth. Always has been…though with time and patience, she’s getting better about it.
But, that’s one of the reasons we knew she needed her teeth done.
And, last week, she was showing small signs of having trouble eating…which meant that no matter how much I worked with her to be okay about checking inside her mouth, I could not put off her dental work any longer.
Appointment was set.

Yesterday morning, we go out to check on everyone, and get Sable ready for her appointment and find her face like this: 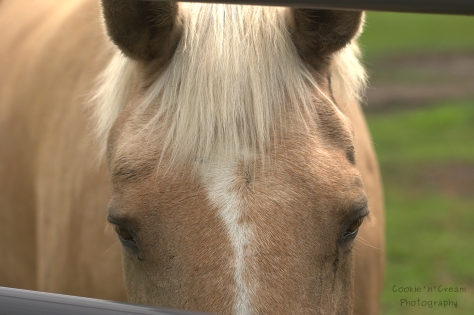 See the swelling on the right side?

I had initially said the swelling was on her left side…I’m an idiot. It’s clearly on her right side.
Oh, and she was not feeling good at all.
Thankfully, the Dr was just a 1/2 hour out and I promised her, he’d help her feel better.

So, my “you can do this Cinderella” horse got a pain shot, and is on a 5 day course of antibiotic to clear this up.
Once that’s done, we’ll reassess to see if she needs another round of antibiotic, and then we’ll talk about her float.
She felt so bad yesterday that there was no way we were going to consider going ahead with the float.
Fighting with 1400lbs to do dental work when she’s not well is never a good idea.
So, I pay a little more in travel fees for the vet to come back out…worth it to get my Big Girl healthy before doing her teeth.

Somewhere along the way, when I was telling her “you can do this Cinderella” I turned Cinderella into Cinder-Bella…because she’s our Palomino Princess.
It just fit.
❤

The bacon seeds have arrived!!

Just about 6 weeks later than last year.
But, life happens.
We were getting close to drought conditions right around when we normally would get piglets, and I was concerned about bringing more livestock onto the Farm without being 100% sure I could keep everyone watered and healthy on the well.

So, we waited.
Then we got amazing rainfalls (that took out my garden a time or two) and now we’ve had good, regular rains (which have been helping my garden…and the weeds in it!).
That eased my worries about water.
Then, we just had to wait for schedules to align to go pick these guys up…that was yesterday. 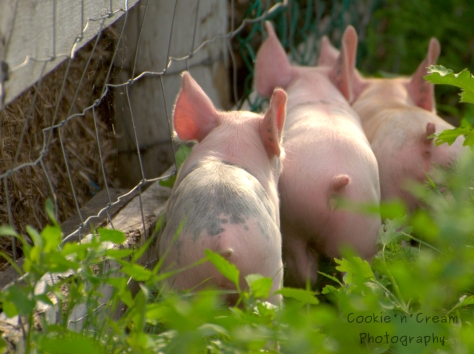 We brought home 6 little baconettes to grow for as long as possible before winter hits.
🙂

Wednesday was an exciting day here.
It didn’t start out that way, but shortly after The Kid got on the school bus, things went a little…interesting.

After I let the birds out, fed and watered them, I came in to finish up some photo editing and uploads…check out the newest album of Great Train Robbery photos here:
Cookie’nCream Photography

So, I’m getting ready to upload, windows are open, it’s quiet…until I hear the mares…squealing and whinnying.
At first, I figure it just them playing…they do that, every now and then, squeal and be silly with each other.
But then, it happens again, with a bit more urgency.
That’s when I got up and looked out the window…

I saw what I thought was a huge dog running into the yard.
It was no dog.
It was this:

I have no idea where he came from, or who he belongs to.
I did learn mighty fast though, that he was a stud.
That’s what all the squealing was about.
Oh! Yay!
Said no full size mare owner ever when a mini stud arrives out of nowhere.

I needed backup.
I called out Hubby.
Once he got home, the plan was to lead our gentlest, yet most interested mare across the driveway, and let him follow her into the front pasture. Once they were in, Hubby would lead Astrid out and I’d close the gate.
It all went to plan, until he stuck his nose right up Astrid’s business and she double-barreled him.
Hahahahaha!!

He went rolling over backwards, popped up and started prancing…
“See!!! I *am* man enough for you, Mare! I can take a hit!”
Thankfully he wasn’t hurt physically…maybe his over inflated pride was, but his body was just fine.
LOL

Hubby led Astrid back across the drive, while I closed the gate…little shit tried charging me, but got a sound whap on his pretty little nose from the lunge whip.
Yup, I get it.
My mares make you want to bring your milkshake to their yard, but it ain’t happening!

By this time, we were all tired, fried from the sun, Sketchy Pete (which is what I was calling him) needed some (more) water and damn, but I needed a beer!
But, still work to do…
I had called the RCMP earlier and posted his picture on FB (hoping someone in the area might know him and come get him), and now had to get a hold of Animal Control.
Hubby went off the visit the closest vet clinic, hoping maybe they knew the little jerk.
Nope, nothing there either.

Thankfully, Animal Control got back to me in pretty short order, and once they had a trailer lined up, they came and we got him loaded up.

So far, I don’t know if anyone has come forward for him.
Too bad, if they haven’t.
He was a cute little thing, and I’m sure with a gelding, he’ll have great potential for a kid’s pet…

“Summer is the time
when one sheds one’s tensions
with one’s clothes,
and the right kind of day
is jeweled balm for the battered spirit.
A few of those days
and
you can become drunk
with the belief that
all’s right with the world.”
~Ada Louis Huxtable

Our musical inspiration today…
The amazing, and timeless, Bob Seger.

Ruby’s face says it all…

Sharing for Wordless Wednesday with Comedy Plus, Image-in-ing, Create with Joy and bethere2day.

Sunrise photos have been happening again.
This makes me happy because sunrise is my favorite time to take pictures…

This set is from just shortly after, on a cool cloudy morning…but the light was still marvelous!

It all started when I saw a certain Palomino laying down in the green, green grass: 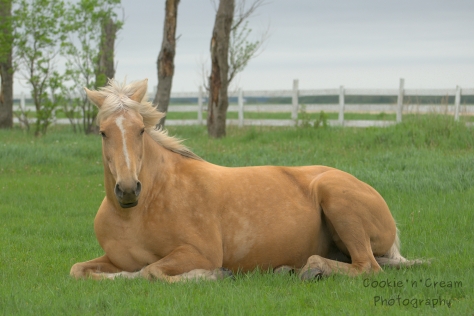 “Well, if I don’t have to get up that’s good…I’m a little peckish” 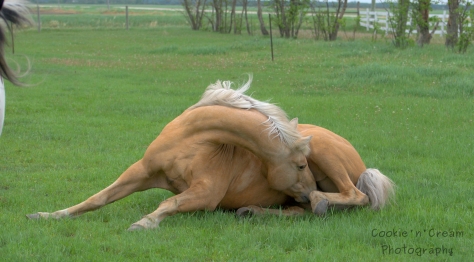 Sharing for Wordless Wednesday with Comedy Plus,
Image-in-ing and Create with Joy