Title says it all. This week has been water in the pasture as the melt begins, wind like mad (which is actually a good thing…helps the water go away faster), and last night, torrential rains.
The good thing is that the temperature stayed above 0*C.
So the Girls were wet, but not cold.

Oh, but the crankiness.
Oh.
My.
Gosh.

With wind coming up from the south, they were on the north side of the garage/shelter this morning, waiting for hay. I knew the second I threw the first flake down that I was going to need another for Sable. The other 3 just shoved her right out.
No surprise, that’s how they are.
If I don’t make extra piles in extra places, my poor Bella would go without.
And I ain’t having that.

So, I made extra piles for everyone, and that should have alleviated any issues. Except for the fact that my dear Paint had her tail in a knot and felt like she should take it out on Sable…while I was in the way. Suffice it to say, this did not go as Cookie planned. She figured she’d clean house, push Bella out and have the food all to herself.
Instead, what she got was my gloves upside the head (because there are no frozen shit balls any more), popped on the muzzle (first time I have ever had to do that…stopped her in her tracks and made her *think*, let me tell you!) and a reminder on what good equine manners look like.
Grumpy old cow.

And that’s the thing.
I know it’s just plain grumpiness from weather, but still…
Poor manners are not allowed.
Especially when it means she tries to chase the Palomino over top of me. 😡
And yes, Sable got a reminder of manners too…because I don’t care if the miserable Paint is coming at you, you DO NOT go over top the human to get away. Period.
Sometimes the problem is just that Sable is over reactive to the small intimidations the others throw at her. That’s her lack of confidence showing. She is 1000% better than she was, but, as an Omega, she still has moments where she panics and reacts, instead of thinking and remembering the smaller being next to her.
Sucks when I have to spank my Old Ladies, but that expectation of  consistent manners is for everyone’s benefit.

When I say we have water, here’s what I mean:

Splashing in the puddle…

This is when the Lake just started coming back, over the weekend. 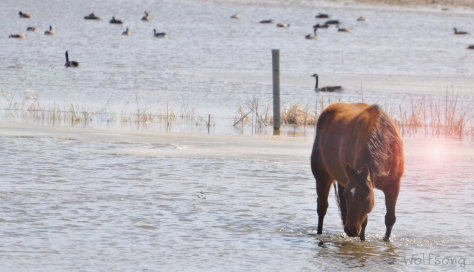 From Monday…you can see some of the geese behind Astrid.
We have had many, many, many, many geese here.
They are noisy.
The Girls don’t like that many geese making noise all at once.
Cranky 1200(ish)lb sleep deprived toddlers. 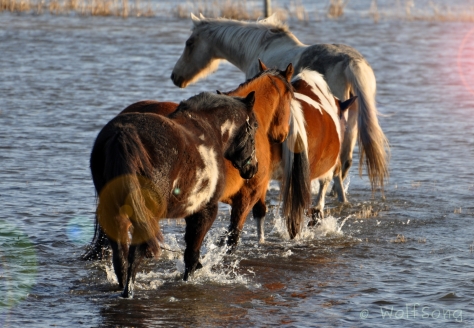 Shortly after this shot, the skies opened up and the rains poured down upon us.

Before anyone worries…
They do have dry spaces to be. Where they eat is dry, and half of the side pasture is dry. They can lie out flat, they can run and play.
They just don’t have the whole pasture…unless they go through some really cold water. 😉
We’re just waiting for the frost in the ground to let go, and then this will be gone. Should be a month, tops.
I’m keeping feet clean the best I can, and so far (knock on wood) everyone is just fine.
Aside from the crankies.
But we have a forecast calling for sunshine for the next few days.
Sunshine is good.
Sunshine always helps their moods.
Mine too.
😉

Earlier in the week, on the Farm FB page, I asked what people thought a Homestead was, was it different from a Farm, if so, how?
I got some great answers, and then, I was going to post mine.
Except, as I started writing what I thought each meant, and how they related to one another, I realized it was getting long…and so, it’s becoming a blog post.

In the meantime, today is my offerings for Friday’s Hunt hosted by Teresa at Eden Hills.
I’ve made it to “L” and I don’t want to break my record this far…so you’ll have to wait for my Farm/Homestead post until later on in the week. 🙂

As we were heading to town Thursday evening, we spotted a group of more than 10 whitetails enjoying the hayfield at the end of our mile road. Once Hubby slowed down and rolled his window down for me to photograph, they made the great escape.

Look that the air!

Love this!!
That’s a 5 foot high fence post, and that deer has cleared it with room to spare. Their jumping abilities are absolutely amazing.
I’m lucky to have caught him/her mid-flight like this.

I don’t have anything for antique…instead I give you Ruby in her black background portrait.

I’m still working on the one that is the perfect representation of Ruby’s personality…her toungue is hanging out. lol!

Have a great week all…Spring does seem to really be here. I know, because I’ve caught the Spring crud, and the horses are shedding their winter coats in clumps.
Won’t be long until we’re seeing green. 🙂

Finally.
Yesterday, we even had some rather Spring like weather.
It was wonderful to go out and take pictures of the Girls, and *not* have to shove the camera back into its bag just to come it the house..combining that with the ensuing panic because I forgot to pull the memory card and I want to see the pictures…NOW!
Ima like an overgrown child that way. lol

I had a plan for Spring photos…
We’ll start with the 2 who gave me the best silly shots:

Not impressed, as you can see.

“If I have to wear this, I want treats.”
~Sable

It was the only way to get Sable focused yesterday.

And then, the shocker of the day, The Painted Ladies…

“Not wearing it on my head, but you wanna put it on my bum?
Fine by me.”
~Ruby

Love this shot so much…our Ruby was not going to go for it on her head, no way, no how. But this turned out wonderful. 🙂

Cookie was the only one who wore the crown over both ears…oh, but she wasn’t happy about it. Not a single ears forward shot out of nearly 100. But this…I put it on her bum, stepped back and called her…Hubby shook a tin of mints, too, but when I said her name she just gave me this look…
***melts***
Yup, that’s my Girl. ❤

Happy Spring y’all!!
May your growing season be long, balanced, and prosperous.

For today, though, I’ve got my offering for the Friday’s Hunt hosted by Teresa at Eden Hills.
Prompts this week are Starts with K, Week’s Favorite and Drink.

She was only supposed to be a temporary indoor kitty, but the little pooh-stick turned into a permanent indoor resident.
It’s okay though…this girlie has personality to spare, and loves to talk up a storm. Here I caught her in the midst of talking to the trees and grass blowing about in the wind.

14 years old, with a myriad of health issues, but still my main snuggle Kitty at night. Such a handsome boy! ❤

Heh. Lifeblood of the Universe…

Can’t start the day with out a good, steaming hot cup of coffee. 🙂

Even though the weather is not cooperating today, it’s only 3 days until Spring. Last night we were rained on, today we have high winds and a possibility of snow (not much though) but, I’m not letting that dampen my enthusiasm for Spring.
The horses, while mildly grumpy about being rained on, were in good spirits this morning, as were the cats and chickens.
Sunday, we have a called for high of +12*c.
Yeah, I’m going to dwell on that. 🙂

So, today I give you Sable and the lei in our countdown to Spring… 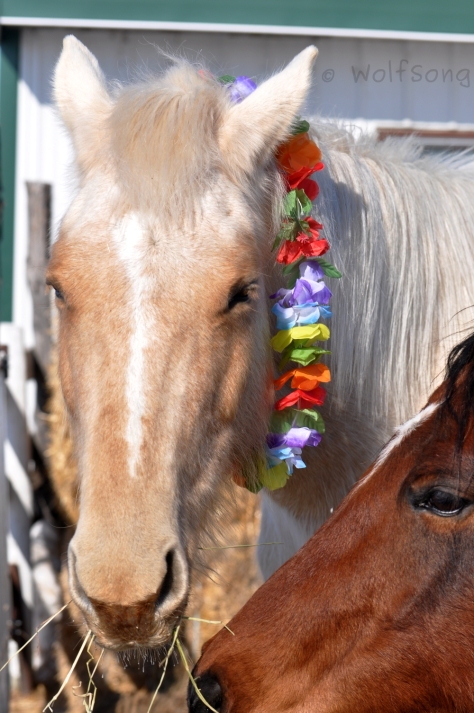 I did manage a few shots of the horses enjoying the sunshine without wind yesterday morning. It wasn’t quite all cats…just mostly cats. 😉 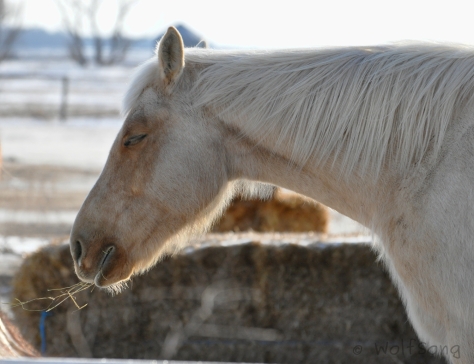 Napping with a full mouth…her way of soaking her hay? 😉

I’m sorry I lost her ears here, but I do love this shot.
Little Red is so pretty. ❤

Ruby is checked right out…

She woke enough to let me know that she knew I was there, but the sunshine was too strong and pulled her eyes closed again. ❤

Today I wanted to take a few shots of the horses dozing in the sunlight. Instead, I took kitty pictures.

She does love a good belly rub, that girl!
Then I hear meowing… 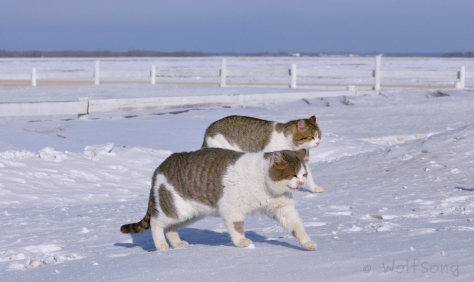 Ghost (in front) and Trouble

Every where Ghost goes, it’s with a conversation. He’s a talker that boy. Oh, and he’s a pretty big fan of the whole belly rub thing too.
So much for my big tough TomCat!

She popped into a hoof hole to have a pee…seemed like a fine time to take her picture. Clearly, she is not impressed!
Notice the Ghost influenced eyes…she is obviously his daughter, seeing as how her Mama (Fiona) was a Siamese with blue eyes.

Finally, one from Saturday…

Just in case you don’t understand why this is hilarious to me, here’s a link: