Having large animals who eat mostly grass, and not having infinite amounts of the stuff, pasture management becomes a very important issue.
Last summer, we made the decision to cross fence our pasture into 2 smaller ones. Not so small that they can’t run, play and still have good grazing. No, just needed to be able to let parts rest. Herbivores can be hard on the grass, and in no time, graze it down so much that it can’t recover.
I know, it seems silly to worry about grass. When I was in the city, my only worry about grass was if I got it cut on a weekly basis.
Now? I don’t cut my yard site.
In fact, my next big purchase (in the next couple of weeks) is going to be a scythe. I have 2 acres of “yard” which we use for garden, playing, bonfires, etc. In that are some spaces where, if I cut it, dry it and bale it, I could be putting up small amounts of hay. I’m not talking enough for winter. Oh, nope, not that much! Hay for winter for my 4 horses averages around 30-35,000 lbs…depending how cold the winter gets.

What I cold be putting up though, are small bales for the beginning of hay season…when the Hay Guy is still in the field, and it’s hard to pin him down to get him to deliver a load. If I have some small stuff on hand to hold out for a week or two, that gives us some wiggle room.
Or, a few small bales for the end of hay season, when I’m not 100% sure we’re ready to stop throwing hay down, but don’t want to open a 800lb bale.
Or, bales for chickens to enjoy and play in, come the inevitable winter doldrums…or, even hay for next years piggies…though, I’ll likely save any moldy stuff we have for them. I did that this past winter, knowing we were going to get piggies, saved (instead of burning) the 2 moldy bales we had for them to enjoy. And they are!
I also have to add…our Hay Guy rules! lol
When we get a bad bale, he replaces it, free.
Now, I know that’s how a good hay supplier should work, but trust me, they don’t all work that way.
Even better though, is that we rarely get a bad bale. I mean, bad bits in a bale can, and do happen. I just pull this out and go on feeding. But, a whole bale? Very, very rare to lose a whole bale, with this fellow.
Unlike our first hay guy.
While the bales that were good were gorgeous, and the Girls did fantastic on them, the ones that were bad were full of foxtail. Like, “burn the whole freaking bale” bad. Not such a big deal if you have cows, really, really big deal when you have horses. So, yeah, we didn’t go back to him.
When we had the chance to switch to our current Hay Guy, we jumped at it, and we were very happy that he was able to add us to his client list.

Anyways…
Here’s a few pictures to show why rotational grazing and poop picking are important parts of pasture management…yes, even in the pasture, I go out every couple of days and pick poop up and move it to the compost pile. When it gets to be too much poop to pick, we hook the chain drag to the tractor and drag the pasture.
These shots are all from the front pasture last night.

Not that long ago, they got a good solid day grazing in the front, and then we got rain and heat. Now, you can’t tell they grazed there at all. Not by looking at it. 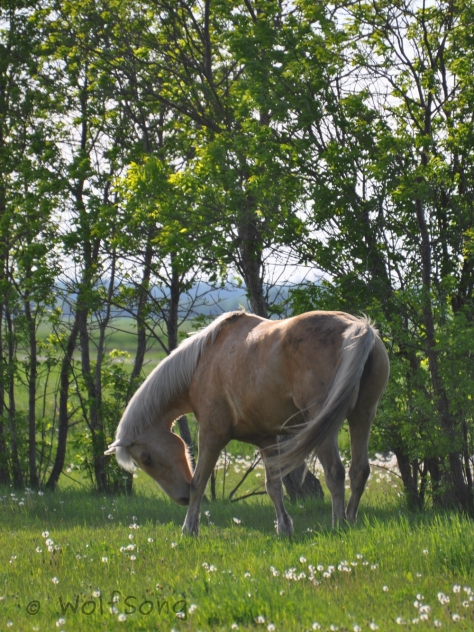 Sable under the trees…

And they all look fabulous.
Good pasture management means that they can graze all summer long, without me having to give them hay. That’s always going to be the goal here. Hay in the winter, pasture in the summer.
The best way to do that is to give the grass time to rest when we can, fertilize it, and let the Girls trim it. 🙂
And let Mother Nature do the rest.

One thought on “Pasture Management”

Looks like I have 8 more Auburn Narragansett turkeys.
My favorite part about pressure canning poultry in bone broth..that leftover bit of broth that I get to drink.
Holy moly does this smell GOOD!!